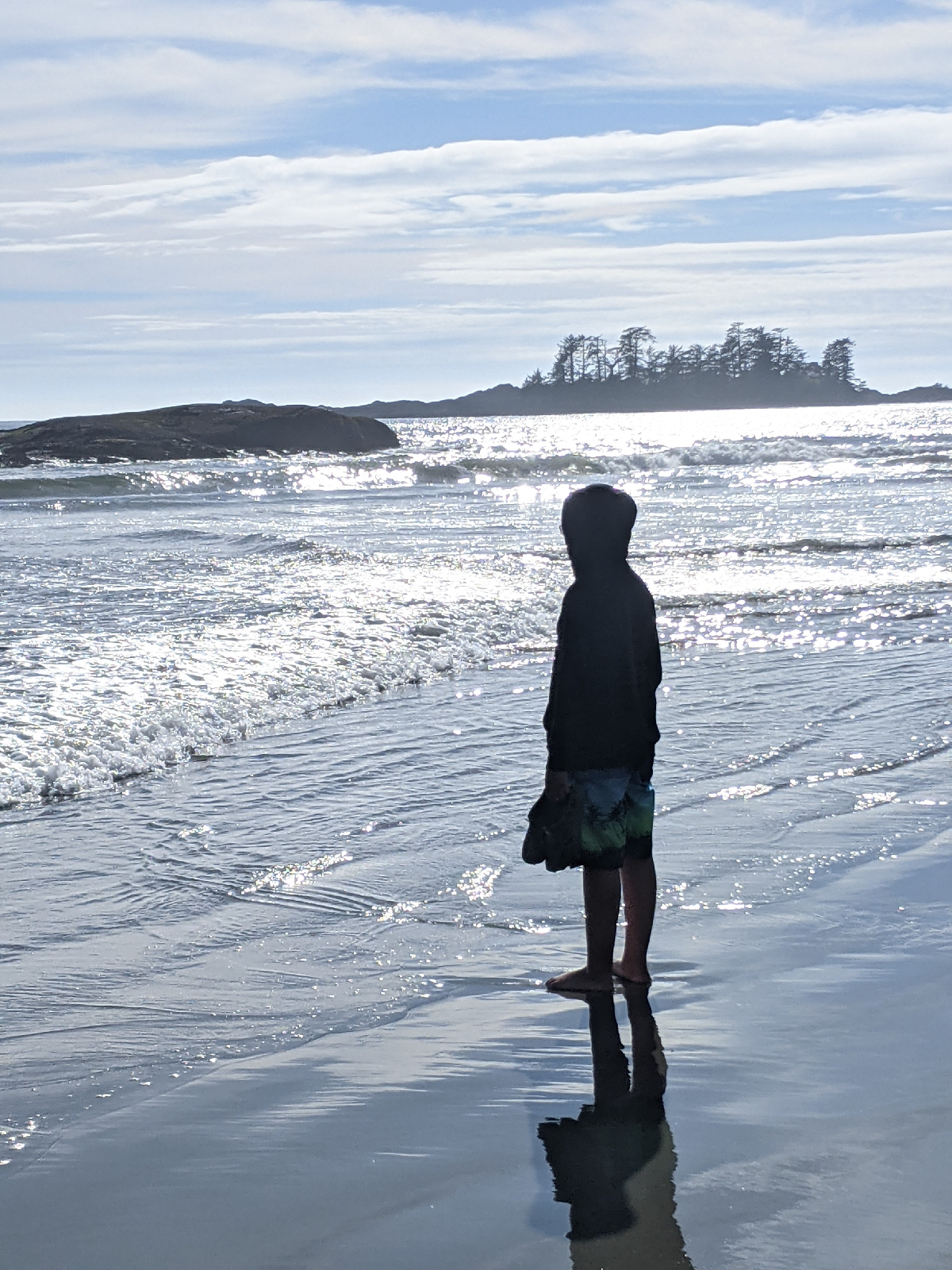 Our next stop on our whirlwind vacation tour BC: Too Expensive To Live There Almost Too Expensive To Visit: Tofino. It's a town on the west side of Vancouver Island, hit by the Pacific Ocean waves unhindered by the Gulf Islands, making it renown for it's surfing. It's the sort of laid back long past hippie town filled with youth, life, and outrageous real estate prices. It has hardcore surfers who I'm sure 'remember back in the day', juxtaposed with the middle class families trying to add a little tropical feel to their vacations. If tropical means water cold enough to give a polar bear hypothermia and an breeze with a bite to remind you that hey, you're still in Canada, pal.

It's not completely gentrified, however. You know, those tourist towns where everything is TOO cute, like it was mandated by a special committee on Curb Appeal and shopkeepers speak in hushed tones about bylaw enforcement; but then you stop for ice cream and it's 14.50 a cone. No, it still has it's lived in edges, I guess there isn't a rush to get out here. Nobody ever thinks of surfing and thinks 'some west coast town north enough that arctic currents are a concern'.

From what I've seen of Tofino, it's still very much a surfing town. Throw a bottle of sunscreen and you are sure to hit a surf rental shop, a surfing school, or a taco shop. Every van, german SUV and hybrid wagon has a surfboard on top. 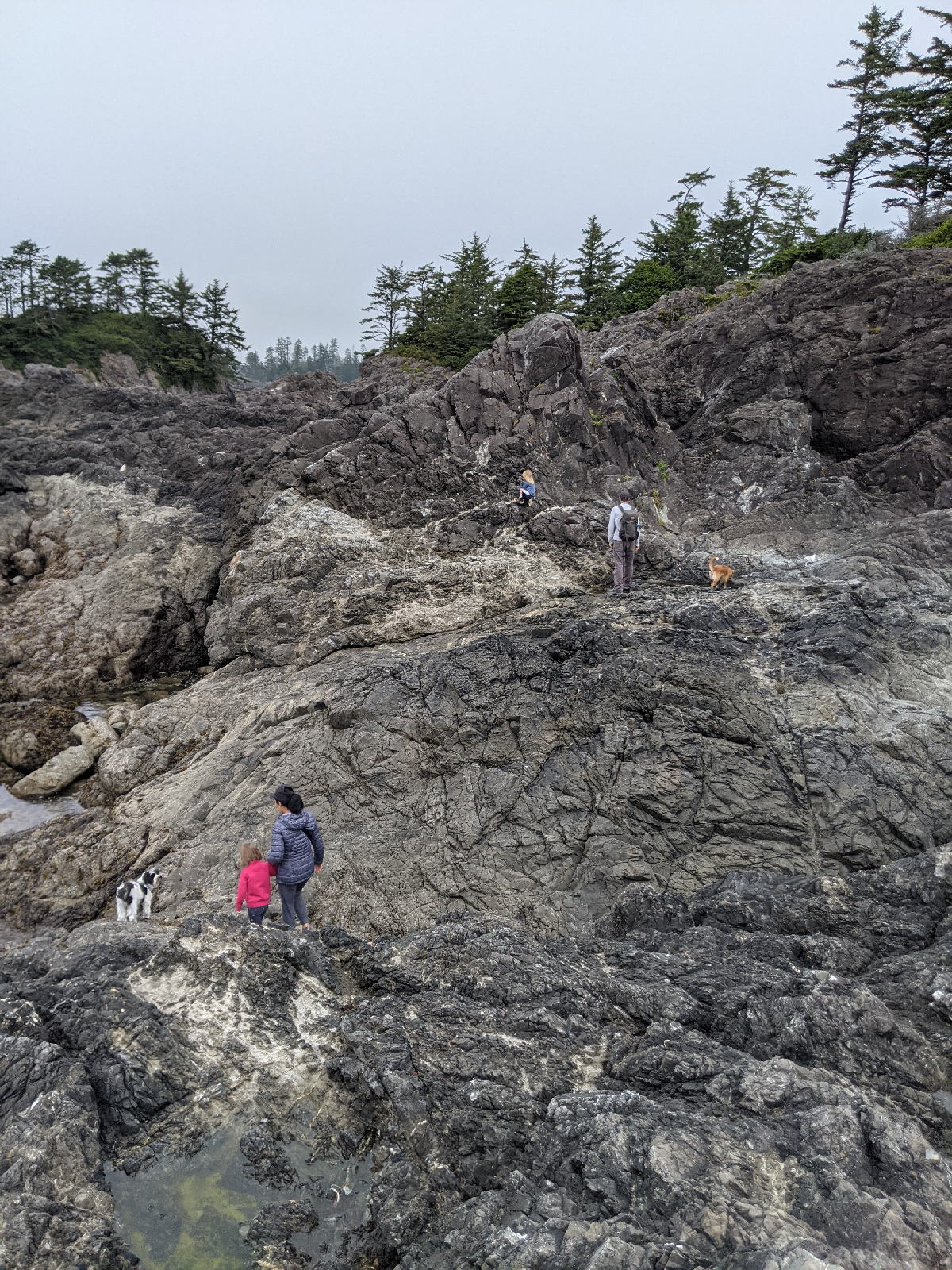 We met our long time friends there. They had moved from the mainland ot the island, not to Tofino, but close enough.
They have small children of the age where they can talk to you, and do, at length, not waiting for social cues. And not speaking with the sort of fluency that one cannot understand without bowing ones head, and repeating what they just said to you several times. They have the cheery fearlessness that comes with that age. When we went on a hike with them there was the frequent warnings to 'be careful' because we were wandering along rocks and near cliffs and these kids either didn't know about gravity or knew about it and weren't terribly impressed.

It's a bit of an adjustment going from teenish kids to toddlers. I'm used to saying stuff I find funny, and usually having one or both of my kids following along. Vice versa, of course. But with toddlers, suddenly there is a whole other layer of translation, an entire gear shift that I completely forgot about.

Our friends soldier on, the amount of work they have to do, from physical to emotional is just enormous. Herding these dynamos of energy and talking and questions and wants and impulsiveness. I feel I gotta take a nap just typing that.

We rented an already setup RV, which is called glamping now. I remember when the phrase was first bandied about. It was egyptian cotton sheets, hand wove linen tent with Kristal in the champagne bucket and massages at 11. This downgrade suits me just fine, though. I prefer air conditioning, flushable toilets, and strangers not touching me thank you very much.
That's another thing about Tofino.  You always get this juxtaposition between the families, the locals, and the tourists with the sort of money to go to resorts with security guards at the entrance. On one hand you'll have the locals who've spent more time bobbing on the waves waiting for the perfect wave than I have ever being in any body of water, baths included; then you'll have the families like us trying not to stick out, slathered in spf 90 and trying not to eat our burritos wrong; and then you'll have the last group who I'm sure get waves hand curated for them with extra sifted sand and all the unattractive seaweed moved out of sight. 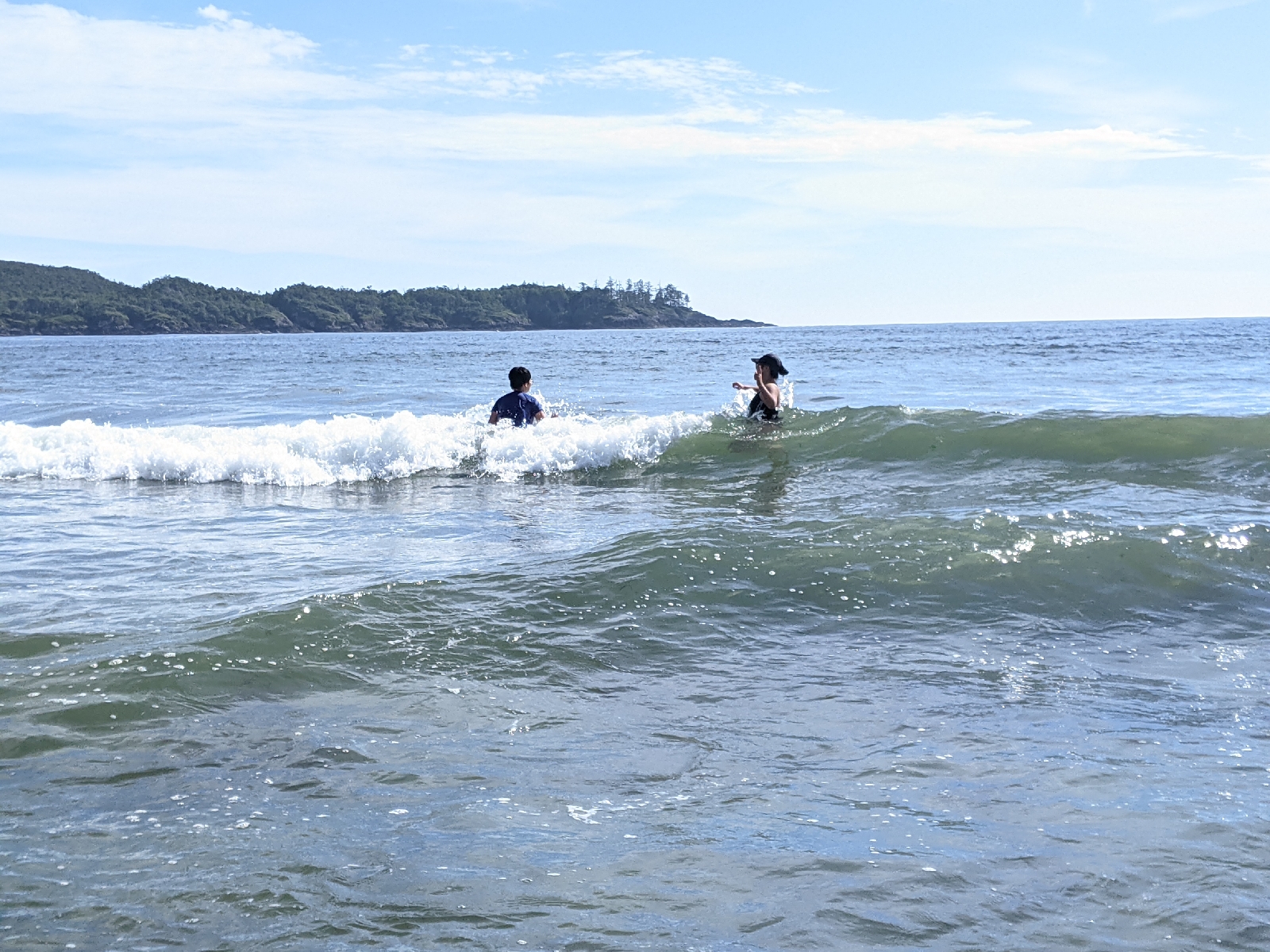 (Pictured above: the calmer waves my kids gamboled in the day before we played in murder waves.)
On the second day we hit the waves for a full day. It's probably part, my kids aren't a huge fan of sports, and part, me having The Complete Collection of Calvin and Hobbes around; but my kids just wanna jump in the waves. The CalvinBall of playing in the waves. While everyone else is in wetsuits trying to surf or body board, my kids are ecstacitc, just happy to get bowled over continuously by waves that are large enough to get my panic reflexes to jumpstart. Maybe it was watching too much Point Break, or 90's Saturday morning cartoons warning you about the dangers of riptides (and drugs, and.. teaching you about passing bills in the senate? That can't be right); but I have a healthy respect for waves.

My kids, forced to swim laps for weekly exercise have no fear of waves. Of any size, as far as I can tell. There could be a small family schooner being brooched, snapping in two, a small child's sailor hat flying from the wreckage, and my kids would charge right ahead, jumping, even. 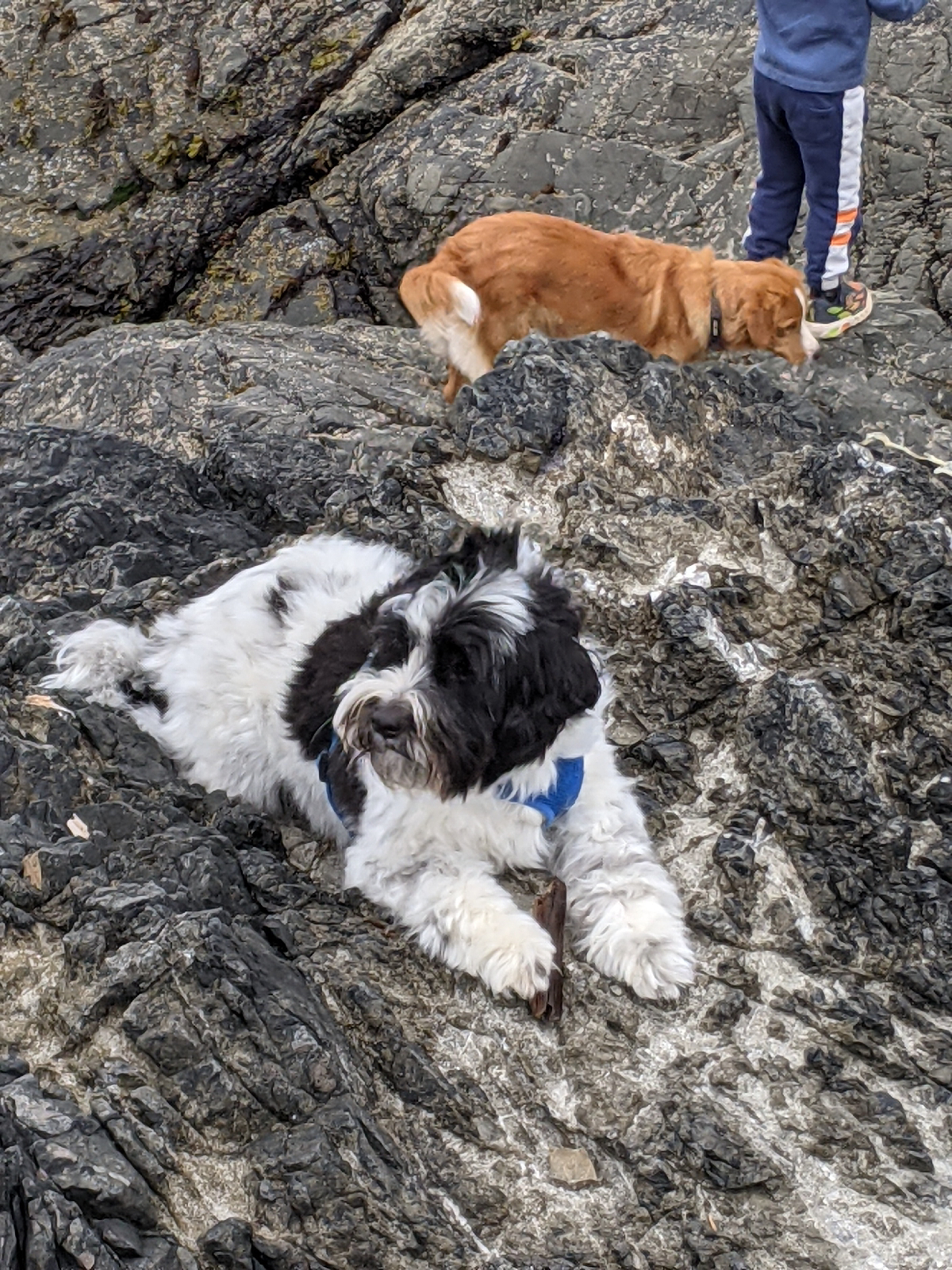 Our time in the waves was naturally ended when I, in classic middle aged dad tourist style, got plastered with a wave hard enough to lose my glasses. The kids were satisfied though. I was exhausted. The burrito shop was closed, in the end, which is just as well, I would have, no doubt, eaten it wrong.
Posted by Niteowl at 11:59 AM