I had put away game making for few months. Not on purpose, my IDE (code editor) was always ready to boot up, taunting me with its colour coded goodness, hilarious refactoring (refactoring is when you rewrite bits of your code to be easier to read, and simpler) bugs, and hipsterish colour themes.

But I would find any manner of excuses to not boot it up, rewatching all of Breaking Bad, because nothing gets one more chipper and motivated than the morale dissolution of a father as the rank and turgid hand of the amphetamine drug trade destroys him utterly; re-reading books I've read far too many times already; surfing the web on a dopamine treadmill of mild-amusement and semi-wonder.

I go through ebbs and flows of creative flow, lately less rather than more. It's more often because the enemy of good is perfect, or fear of failure, or just because, well, it's difficult. Which would be fine, except that when I'm not creating something there is a feeling that I should be doing something, like there's a heap of homework teetering on my desk that needs attending and which I'll ignore until it falls on me, possibly crushing me to death if not by gravity then by embarassment.

So it's a battle between creating stuff, and releasing a undefinable pressure, and the fear of putting something out there that is so far from my expectations of what is 'good' that I implode in a localized blackhole of disappointment. Balancing right between two nearly equal nagging sources of discomfort is a hell of a way to spend one's free time.

This has been on the desktop for months and months. Actually reading it again helped me to get going: 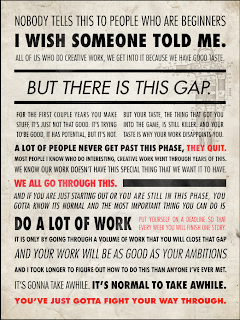 This is the general rule of thumb I use. (This is also a fantastic piece on finishing games, by the guy behind Spelunky). The problem is I get into a thing, and then start following all the movers and shakers of that thing, then start looking at their work,and the chasm between the great stuff they are doing and the, frankly, shit I'm creating kinda pulls me down and drags me dry. It's the fighting through bit that I'm having trouble with, I guess.

With game dev, there really isn't any distinction between amateur (me) and indie (people who are making their living doing it and were likely doing it years before as amateurs before they went indie). And frankly, we are in the middle of an explosion of indie game devs as devs who've been in the industry forever are making their own way of it, funding themselves through Kickstarter, or boot strapping it, and selling it online through Steam or GOG or whatever, bypassing publishers. So there's no limit at the number of indie devs I can find on twitter or tumblr or wherever who are doing amazing work, and seemingly nowhere are their rank amateurs like me just trying to get the simplest things out.

I get myself going again by breaking down the very problems into smaller problems, then smaller, then still problems until it's the simplest thing in the world to figure out. And I can sort of get my workflow going again. The problem is always when I look at the bigger piece.

The game I'm working on, as a whole, is crap. There is nothing compelling or interesting that will keep a player playing for longer than, say, 10 minutes. Or 5 minutes, now that I think about it. And there are still problems and slog I gotta churn through until I can release it. But it's slog and churn for a project I'm not longer terribly interested in.

The trick is there are games I want to work on, that are not too complicated and that I might be able to actually do. But some part of the thorough OCD person in me can't start another before this one is finished. So we are back at square one with slog to get through, and an unappetizing game as a reward.

So anyways I'm stuck in a constant loop of being frustrated with the game and having some sort of Puritan work ethic that's keeping me from more interesting stuff until I finish this one.

Posted by Niteowl at 1:28 PM No comments: