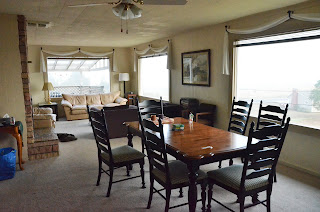 We live in a townhouse complex. Those communal affairs that are not quite apartments and not quite duplexes but most people there have some sort of familial unit that requires more space and the general population is not crammed with young professionals who's idea of Keeping It Down mean keeping the 500 watt amps inside their unit and for whom Going To Sleep At A Reasonable Hour is something not far from incomprehensible.

It means communities where quiet, somewhat fuddy, somewhat duddy hobbies are embraced as appropriate and even Alright now that everyone is of a certain age never mind that its the sort of thing I did even when I was youthful and supposedly full of vim and vigour (perhaps the first clue I've been  more on the bookworm side is I would use the term 'vim' without thinking it might be as modern day appropriate as blunderbuss, Black Lung, or consumption (dying of, not mass)).

And its through these activities that an alarmingly large number of families have bonded together. 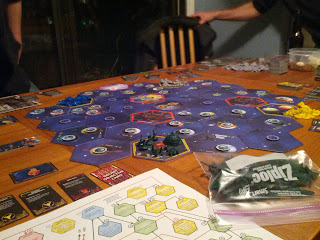 The men, by playing european board games about, amongst other things, power distribution in a large German city, battling monsters for control of Tokyo, and winning the favour of the marriagable princess in 16th century Normandy (we cast a wide net).

The women, by having a wine drinking club that occasionally discusses books. It might not be applicable to all book clubs, or all women book clubs, but it certainly pertains to this one, that the books they choose make some of the drearier Russian novelists look like auditioning members of Menudo. Dire subjects, plot lines more dire by far that involve this relationship falling in dissolution, that childhood trauma being revealed, and everyone in the end being shipped to a leper penal colony.

This may explain the wine, actually.

On top of that you have kids who more or less get along. The older ones tolerating the younger ones, as the case often is, the younger in a state of endless hero worship. Or at least unquestioning attachment. All the kids invariably jockeying for position to play with the kid that's older. Sometimes, it's magic, where they all find some imaginary game where they can all, more or less, participate in. Or at the very least, the younger ones are not aware they are being excluded. That's some parenting nirvana right there. Kids at free-play learning how to socialize and the like, parental duties involve doing absolutely nothing except listening for wailing or complete, unbroken silence.
It's great that everyone gets along, pretty shocking, actually. So in an effort tempt fate we decided, all 17 of us, to pack off to Whidby Island and hang out at a beach house together. My brain immediately thought of a G-rated Big Chill, minus Kevin Costner in a coffin, obviously.

We all made it there in various cars and vans, down through the border which I'm always worried will involve a grumpy border guard and various breaches of the Geneva Convention. But they never do because a young family driving a 11 year old hatchback gets a pass, generally.

After the hubub of travel with the nauseau and the cliched questions about 'there' and the state of 'yet'ness and always lurking, the not entirely irrational fear that a gunfight will break out as soon as we see speed limits posted in seemingly sedate MPH, its was relief to make it to the farmhouse.  An place where we can all live in even closer quarters and do the things we generally do anyway but a few hundred miles away and with a beach close by. Our communal living arrangement made more communal.