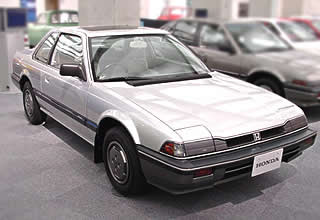 I grew up surrounded by rich Taiwanese and Hong Kong kids who drove Integras and Supras and RX-7's. Well, maybe not surrounded. There were plenty of normal Canadian Asians in my highschool and university, but the unbearably spoiled ones were damn conspicuous. Maybe it's this that influenced me to get something that, under a dense fog and a few shots of whiskey, might be construed as a sports car.

Then again maybe I tried to get a sporty car because it was my first damn car and I was young and dumb(er).

It was a 1985 Honda Prelude, white. It was an SE (slow version), not an Si (not as slow), but the people who sold it to us painted the damn bumper white (only available in the Si) so it looked like, well, an ass-ugly Prelude SE with a painted bumper.

They were as shady as an Italian in any film depicting 1930's New York and were very, very Russian. They might have been Ukranian, actually. All I knew is they had a thick accent and that far away look that made every day cruelties and injustices not something that bothered them overly. Thick hide, is what I'm getting at. Like maybe they were involved in illegal military action in a country whose borders hadn't quite been resolved or or maybe their closest friends went blind drinking methanol. Something hard went down in their lives at some point. Or maybe they were just gangsters. Just hard because that's what the work required.

I'm not sure how I remember it, but I do remember my dad remarking how they were 'trying to sell quite a few cars'. Which seemed odd. If you are selling several used cars and you don't, in fact, have a Used Car Lot and a garishly sterotypical coat then you're likely operating in the gray zone of everyday commerce.

Luckily my dad was an immigrant too. Maybe not from the same part of the world but I think immigrants all over North America understand each other a little better than they understand Westerners. To wit, life is Hard. Money is money. Haggle with both hands and don't blink.

I was left in the car, sitting in the drivers seat. It sat low. Real low. Vertebrae snapping low. Low enough that one had to get used to gauging the speedbump height. So I sat there, admiring my first real Ticket To Freedom. They haggled for about an hour. Later I found out it was over about 25 bucks. I did not find this unusual.

It eventually broke down. That's how I learned about timing belts. Our family isn't much into cars, so all my car lessons are expensive and fraught with confusion.

But all in all it was a good little car. It had a stick shift, which, to be honest, was pretty much the only thing I cared about. It cornered pretty well, not that I raced it at all, or have enough skill in driving to know what a really good cornering car does. But I knew It wasn't a floaty mass of turgid springs and body roll like my uncle's Mustang, or the family Dodge Caravan, so that was enough for me. It also, I guess, went from 0-60 in slightly less than 10 seconds, but I drove that thing like your great aunt drives her Toyota Tercel, carefully, worringly, with the softest and most gentle hand possible. Because to me I realized it wasn't a SUPER RAD FAST CAR WAHOOO, it was A Way To Get Out Of The House. Which is really far more exciting.
Posted by Niteowl at 12:59 AM 1 comment:

Things My 11-Month Old Can Do That Is Unacceptable For 47-Year Old Accounts Manager Brad Diaderod Currently Enjoying a Stopover In Muskegon, Michigan

Things I was pretty sure everyone did until I found out no, it was just me.

Thanks metamonk, for the idea.