What was your first bike? I grew up in a largish family, last. This means that while I may have been the 'baby' (a moniker and reputation no self-respecting sibling would cotton to), almost everything I ever had was a hand-me-down. I think, actually, I got my first new NEW bike in my 2nd year of university.

But, back to first bikes. Your very very first bike? What was it? Did you dream about it, have a Sears catalog cutout that you kept under your Star Wars pillow case, know every minutae and every word of the sales copy? Was it a Schwinn ten-speed? A Mongoose BMX? A, heaven forbid, Huffy?

I don't recall ever really wanting anything for an inordinate amount of time (the hope I'd get some newest-fangled thingamadoodle was quashed pretty early and often), and a bike was no exception. I saw BMX Bandits, sure, but I don't think I ever thought of having one of those. I wasn't cool enough or adventurous enough, and besides, turning on the TV to watch Electric Company got me winded.

My first bike was some sort of banana seated ... fixie? Is that what they call them? It had coaster breaks, so you could do wicked skids with them. The tires were a type of cheap foam or solid rubber so you NEVER had a flat tire. Of course, it had all the smoothness a sliding town a gravel road infested with speedbumps on corrugated iron sheet during an earthquake, but that was besides the point. The banana seat made me feel like I was riding a chopper.

The next bike that I can remember, I'm sure I had many hand-me-downs in between, was a 5-speed cruiser that me and my friends called "The Red Elephant". I was 12, 13ish, the Elephant was built for an adult man with an overactive pituitary gland. It had these enormous wheels that I swear would not seem out of place on those turn of the century high wheel bikes. These things turned and it didn't so much roll as MOVE THE EARTH UNDER IT. It was quite easily the least cool thing I had ever owned (which is, well, saying a lot). The plus side was that, since this was during the height of the mountain bike craze (and nobbly tires), and owing to the aforementioned enormous (and, actually, road slick, razor thin wheels), it was harrowingly fast. The route from my house to the elementary was down a street/highway workaround. There is no sidewalk, just a paved shoulder. While it was dangerous, it was super fun to go screaming down that road to school, going indecent speeds at a height that would immediately get me three tickets or a fast track career path if I worked for a medieval sultan.

I don't ride bikes anymore. The thought of getting on one makes me sleepy and the thought of trying to learn all the new lingo makes me almost comatose.

But damn, bikes sure were fun, weren't they?
Posted by Niteowl at 2:45 PM 2 comments:

Looking at my collection of Autobots in my cubicle (the ones who make Hyperion, if you must know), a re-occurring thought, uh, occurred. We never think about it, but there's always a Last Time for something, right? Say, I used to play with Transformers, but one day, one day it was the very last day I'd ever transform Optimus and make that transforming noise. There's no real sense of occasion, it just stumbles across us, and soon we're listening to "Misty Mountain Top" by Zeppelin and trying to grow a respectable mullet. Optimus forgotten, the rad awesome voice of Soundwave a glimmer of a memory.

And one day, you give up Zeppelin, and move onto Sound Garden, or Ice-T, or Street Fighter II. There are these ephemeral hobbies and interests that take up so much of our world and our time, that shape how we see the world and what we see of it. I don't think that, while in the throes of some wicked Joe Satriani lick or finishing the last panel of a Power Pack comic, that we ever consider that we'll never do it again. We'll never give it the care and attention it demanded from us.

At some point, these past-times become nostalgia, which then become fodder for next year's Michael Bay Breast and BOOM-BOOM ExxxTRAVEGANZA! It's something. I'm not sure if it's sad, per se, but it's evidence of the ever rushing passage of time all around us while we fly fish haphazardly in its waters, assured that we will never move, ignorant of the impermanence.

But easy there, before I get too philosophical and have to write an unpublished polemic on space-time and our reality in it and rise to the assistant district manager at a local fast food chain. This isn't some deep and profound insight. You can never go back home, as they say. True enough. You can never quite watch a 297 pound man jump 6 feet off a top rope and absolutely believe it's real again, you can never get those butterflies while trying to get your car in gear on uphill red light.

But there is a transition from there to here, isn't there? A Last Time.

Except for assembling Hyperion, this robot is fricking sweet.
Posted by Niteowl at 11:06 PM 4 comments:

Email ThisBlogThis!Share to TwitterShare to FacebookShare to Pinterest
Labels: life, thought of the day 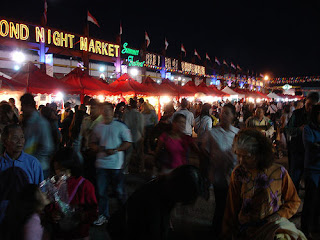 thanks to ydhsu for the pic

This past weekend we decided, to hell with curfews, likely meltdowns, a napalm powered cranky toddler with lungs of a robotic screaming dinosaur, we were going out. OUT. As in, out of the home! When it's nighttime! We are a young and semi-but-not-really-free family! We can do whatever the heck we want! Maybe even swear, or eat fast food! Course, we didn't want to go too crazy. It's not like we were going out to the local indie movie festival followed by a Slam Poetry competition and finished by a after-hours rave at a disused grain elevator. But, you know, something semi-exciting!

We settled on the Richmond Night Market. Apparently the largest night market in Canada, which, is, well I'm not sure that's saying all to much. In a country where the weather is lethally cold, malarially humid, or 'meh, you call this summer!?', I'm not sure we can say we lead the charge in Night Market..ing.

Richmond, for those of you who don't know, is an expanse of flat land which goes in every direction as far as the eye can see, or to the mountains, whichever comes first. It's population is overwhelmingly Chinese, even for the Lower Mainland. This is like saying Zimbabwe is overwhelmingly African, even for Africa. Or that parts of America are overwhelmingly armed, even for America. There are parts of Richmond that have, I think, nothing but signs in Chinese. These swaths of the city desperately need an Occidental Town, where people can buy pot roast and overpriced but on the non-legal action side of the law merchandise.

Ah, Richmond Night Market. Where every form of trinket and bauble can be bought, cash, no refunds, 'tax included'. If you're into Hello Kitty or Asian cinema at all, this is the place to be. If you are wondering what people do when they buy commercial-grade 28 slot DVD copiers, well, this is the place for you too. If you are in the market for cheap knockoffs that most likely will disintegrate in your hand if exposed to rain, sunlight, wind, or, you know, use, then come on down!

The entire ground is packed with enterprising souls with a contact in Hong Kong and the ability to set up an outside awning. They have that look of 'it's my father's tent, I just want to go to the mall, but I'll pretend to mind the shop'.

The food fair is where it's at, however all manner of Vietnamese, Korean, Chinese or fusion cuisine you can think of. Dim sum? Got it. Bubble tea? Is there any other kind!? Oddly cut fried potato on a stick? You betcha! Mini-donuts? Why not! It's a place where MSG, adult-onset diabetes, and mild angina get together for a PARTY!

It was a nice get away, if hot. We saw, and those of you who are new parents will giggle in recognition, the sun set for the first time in... well, it felt like years. There were no meltdowns, oddly, and thankfully, enough. The food punishing to the body but awesome. I think we got some trinkets, which have since been lost, tossed, or spontaneously exploded under a stern stare.