In October (yes, I take a while to get back to posts I start), we went to a pumpkin patch to get our gourd for Halloweeen. If don't know, pretty much any large event that might bring families are large, commercial affairs. Trinkets and goodies of questionable healthiness are sold in every sodden mud-caked square inch of field. There are local bands who butcher rock classics to include the word 'pumpkin'. No, I will not regale you with titles. Let's just say it's like having your nostalgia regurgitated through the candy-corn-crusted nether regions of a gourd from camp hell. It's not a pleasant experience.

It was quite an event. There was mud, and mud on mud, and dirt that looked somewhat dry and not hazardous but just turned out to be convincingly light-coloured mud. There were also corn-mazes, because if there is anything you want to do on a cold October day, it's to get lost in rows upon rows of cow-grade maize and endless trails of, well, mud.

During our tousle getting out the door, we forgot Owlet's proper wet gear. So in the drizzle, we had to assemble a Frankensteinian abomination of Owl Jr's clothes, some stuff left in the drunk, and a small but unwieldy umbrella; it might have been fashioned after a frog. And that's when it hit me, or was reinforced, as I gazed at our friend's children, who were wearing matching yellow slicker of some sort, how much children's fashion isn't so much about looking stylish, at least, for most parents; but more about ensuring your child doesn't look like an unamusing, tragic extra from Oliver!, which Owlet surely did.

It's not like she cared, she just wanted to get going. Going to whereever we were going to run too fast and get ridiculously dirty and have her parents freak out as new parents always do. The thing about dirty kids, is yes, on one hand, let kids be kids and get rough and tumble; but on the other hand, when all they have to get to is the car, they act as these impressive dirt multipliers, getting more things dirty that will surely have to be cleaned faster than you can repeat "OH GOD PLEASE DON'T TOUCH THAT". For me, it's not so much the fact of a dirty child. If she doesn't care, I don't. It's just the eventual time sink of trying to clean from our cloth and pleather seats something that looks like a cross between regurgitated grass and sculpting clay.

Or maybe I'm just a very prissy father, whatever.

During the course of wandering the mud fields looking for the right pumpkin, I saw a bunch of workers drive in a tractor, and unload pumpkins. Because we were in a mud field, not a pumpkin patch. The real pumpkin growing was done in some off-site lot, or imported from Argentina, or grown in a sinisterly lit warehouse with steel drum vats with supervisors who's middle name was 'von'. Or maybe I'm getting my imagination into overdrive because pumpkin-fueled family cheese can only push a man so far.

At some point, the kids were led to a straw field where they threw straw at each other and got the sort of dirty I can get behind, non-transferrable. I took many shots, and eventually got a keeper. So I guess the trip wasn't all bad. 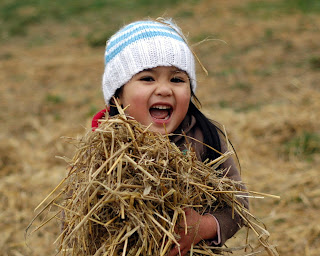 So, it's all over, that great spectacle of human striving, that culmination of a nation's hopes and dreams, all on the international stage of sport. A showcase of our country, our culture, yes, but moreso a near sacred rite about competition itself.

I'm speaking about, of course, the Men's Olympic Gold Hockey Finals. Oh, we can blather about ice skating this, speed skating that, moguls, boarder-cross, aerials, but it's all just preamble to talk about the hockey. At least in Canada.

And thank god Canada won eh? Not that I'm any massive hockey nut (even though I did follow the hockey and did watch the gold medal round). But my country is. I've tried and failed to think of comparative obsessions, but I'm not sure they quite match. Japan, for instance, really loves ski-jumping. Malaysia loves badminton. New Zealand is tied to rugby. Most countries are frighteningly involved with soccer. And, speaking with American friends, I can't quite find how to frame a Canadians relationship to hockey. It's perhaps like Texas and football. Or Boston and baseball? I'm starting to lose my way, because I'm trying to talk about sport, and unless are talking about Super Spike V-Ball for the NES, I have very little to say with any coherence.

This is a country that cheered most loudly during the Winter Olympic closing ceremonies when the old theme song for "Hockey Night In Canada" played very briefly, in a montage. A country that has played street hockey since forever, ice hockey if they were lucky, and has obsessed about the sport for generations. A country where all sports pale in comparison, fade to the back.

A country that is assailed with messages from the media (or reflected back, I'm not sure which), that hockey is our national game, is our game, is what makes us Canadian, is the reason we trapped fur, made maple syrup, put our policemen in red and insist they be mounted, stormed Juno beach, invented universal healthcare, and speak two languages.

So, yes, I do say thank god we won gold. Because we do care about the sport a helluva lot. Not that Americans don't deserve to win. But you got so many sports as it is; and hockey, while violent and all that, likely doesn't hold a candle to football or baseball or basketball in whatever region you're from. No American newscaster would ever use a phrase like, "As the nation reels from disappointment.." when talking about a hockey tournament, not with a straight face.

Oh, we would. There'd be rending of hair and a measureable dip in GDP. A further dip in the birth rate, car sales, church attendance, community involvement, choir recitals, Elk lodge AGM attendance, you name it, it'd feel a dip.

But we won. There was spontaneous honking on at every intersection, waving of flags, a surge in that little felt emotion, Canadian patriotism. Waves of people flooding downtown with maple leaves on sweaters and hats and shirts and painted in sundry places. Canadians being even more friendly than usual.

God we love our hockey.
Posted by Niteowl at 11:06 PM No comments: