My parents came from hot countries, where the smell of uncatalytic-converted exhaust under the oppression of humidity make nostalgia. Countries where far too many people usually carrying far too many infants lash themselves to vehicles that could nominally be called motorcycles. If a 250cc Honda breaking every Federal Vehicle Safety Standard (and some yet to be written) while careening between two larger buses (with not so much blind spots as blind panoramas) could be called  a motorcycle.

Car maintenance was not a well-covered subject.

I can still remember my dad showing me that when the oil was low, you just add another quart. It's quite alright, feel free to recoil visibly from the screen.

It wasn't until I had my own car that I learned about things like timing belts and oil changes and all sorts of filters. So now, of course, I get regular oil changes.

There are things that cause aggravation, however. Sitting in the car, having the oil technician explain all sorts of things to you, positively cowing you with technical jargon you only ever hear about every 5000km. And it's always said in such a way as it's assumed you have any idea what fluid they are talking about. "Oh yes, the flambgerge diatcontatenator, of course, that needs to be flushed!". "Why wouldn't the triambulating kraanstenmeter be refiltered with a synthetic proformance lubricant?!".

And it was in a flee from this technical brow-beating that I endeavoured to learn to change my own damn oil.

It's not horribly complicated. You get the type of oil your car needs in sufficent quantities, you get the model of oil filter it needs. You get a car jack to hoist your many thousand pound amalgamation of steel and rubber hoses above your squishy, fairly clueless skull as you wriggle beneath it and try to find which nut, exactly, sets forth a gloopity schlupp of old, dirty oil. I may have devolved in Seussian terminology there and that's mainly fear induced. The filter and oil all make sense to me, marginally. The Hoist Really Heavy Thing Above your Head gave me pause.

It's reassuring, the heft and weight of the entire jack system, with the.... feet.. things... and the wheel stopping things. But something about my complete lack of most vehicular knowledge plus my confusion at society's misplaced trust that I'm certified or in any way trained to hoist an entire car above my head does get me somewhat squirrelly at times.

That whole process I'm constantly looking for the adult to be supervising the activity and find, most worrisome, that it's me.

Contrary to all common sense or laws of causality, I've changed my oil twice so far without any major incident. But, most importantly for me, without anyone asking "If I really think I should let the ammonium dioxicraft stay in the defibrillated counter-position past 3000km".
Posted by Niteowl at 10:51 PM 1 comment:

As a challenge, for the questionable glory, just to say I Did That on my death bed, and, most importantly, to have a free pass on having to do cleanup or *shudder* outdoor activities (maybe even sports!), I offered to do all the cooking. For 17 people. For two days. 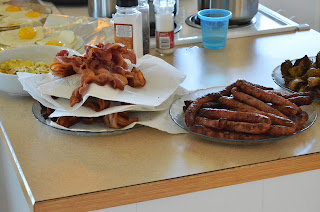 To make it somewhat manageable I squished breakfast and lunch into a meal I  like to call Very Late Breakfast. And dinners were all dishes I'd done before, just on a much grander scale. With so many burners and ovens going it's a game of efficiency, the  "What can I have going at the same time as the other thing while at the same time being something that I don't have to worry about burning oh god I forgot that other thing now everything is late by three hours" game.  I ended up like Rainman, counting out numbers to myself and staring at the clock. Sauteeing one thing while counting down the time for something else to finish in that pan over there. It was, for a certain slightly not quite right frame of mind, actually pretty fun.

On Saturday there was bacon, sausage, home fried herb potatoes,  fruit, eggs over easy, crepes with apple pie topping. Then roast chicken with roasted root veggies (onions, garlic, carrots, potatoes) and gravy for dinner. Sunday was eggs benedict, bacon, sausage, fruit, toast for brunch. For dinner a
rather involved stew that featured an entire bottle of wine and garlic bread. None of those items by themselves were horribly complicated, no puff pastries or souffles and the like, but the sheer quantity made the cooking experience... lively?

Our 21st century kids were, I think, exactly the way I would be if I had interactive touch screens chock full of all sorts  of games JUUUST within reach. Conniving, planning, and sometimes just plain whiny, trying to get 'screen time' . Time when playing games was allowed, in other words.  We, being 21st century parents were equally chockful of guilt with allowing them too much screen time. But there would alway s be one parent, at some time or another, who's guard would be down, too tired or too cranky or whatever, and the kids would pounce and wheedle away an hour or 30 minutes of uninterrupted Minecraft or Angry Whatever.

And other times the kids, in their gaggly, wild way, would invent borderline maiming activities that were probably better for them in the long run than any number of touch screen devices. Games like Roll Down the Stairs and Laugh For No Apparent Reason. Or the never old Scream and Run and Make Far Too Much Noise game.

There was also campfires and unevenly enthusiastic sing-alongs. By the end we hadn't all melted down into a horrible mess of strained relationships and awkward silences. Which is a win, I think.
Posted by Niteowl at 10:39 PM No comments: