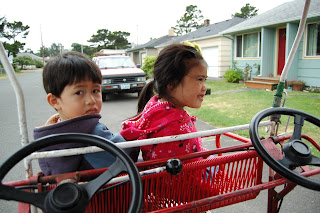 We were there only for a few days, hoping to avoid the dreaded affliction of boredom that runs rampant among kids 1 to 65. So the next day we had to pack in all the quaint and Kodak-moment worthy activities that any beach-side town has in abundance. The activities that look really fun and laugh-a-minute until you're on the bumper boat and the water smells like bilge from a recently decommissioned Ukranian cargo ship and your particular boat is persistently wreathed in engine smoke that smells faintly of burnt hot-dogs.

It wasn't as bad as all that, thankfully. There is a sheen though, isn't there, to all those whacky activities, like our first one: Bike Cars! A side-by-side tandem bike with seats in the front for the kids and pedalled seats in the back for the galley-slav--I mean parents. And to steer they give you an actual steering wheel! Oh the whimsy! There is a sheen, anyways, when you first see them, a novelty, a minor spastic scurrying of imagination, 'Wow! That's kinda NEAT!' you might think as you adjust your collection of Norman Rockwell buttons deftly arranged on your cardigan. But when you get there, it's the same sullen teenagers; the same iron-clad waiver agreements that makes one look about casually for Bike Car! sanctioned burial plots; the same state of the item you're going to rent: made of pig-iron and a type of pleather that's been outlawed thirty years ago due it's immediate carcinnogenic effects and indestructibility.

The kids had fun, more than I thought they would. I guess being at the front of a self-powered car without absolutely nothing in front of you has it's charms. A bit better than being in the back seat while strapped into a whatever government ministry approved child safety device that can withstand everything short of a direct RPG hit. View can't be that good.

We took a tour of Seaside, it was as quiant as you'd imagine. However, these car-bikes were supposed to follow proper right of way rules, like a, well, a car. But they'd have teenagers driving it, or moxie-filled tweens. So there were quite a few scenes that made me simultaneously cringe and bite down on the urge to shake my aged fist at a passing car-bike and yell 'Where'd ya learn how to drive?! And turn down the rock n roll!'.

Next up was -- and you'll forgive me for relating a phrase my 2-year-old says that I find cute  but that anyone else will find groan-inducing-- the bumpy cars. Zooming along in 1950's technology with safety straps from about the same era. Crammed with kids and adults and different cliques that quite clearly want to do each other massive harm, and, touchingly, are rather sorry if they hit you in the process. I drive the kids around, in turns. You can feel the butterflies just humming in their tiny bodies. A car!? Just the two of us?! That bumps?! I remember that. That's when driving was fun. Now driving is an exercise in maximal safety while calculating MPGs and best routes and avoid traffic and watching blind spots. I think everyone would have alot more fun in life if our cars had all of 3 horsepower and came equipped with massive rubber bumpers.

That is, of course, until the sheen wears off.
Posted by Niteowl at 12:23 AM 1 comment: