Don Draper is the lead character in Mad Men, a swanky 60's cool drama about advertising.

It's a war out there. Every day, on the job.

Anyone can live in a house, but a man wants to reside in his castle. And while there, he needs everyone on his side. Everyone pulling with him. And to where. To where is he taking his family?

To the future. It's not a new world of gristle and grime, of steel and coal. It's plastics, rayon, aluminum.

Aluminum Siding.
Your home, your castle.
Posted by Niteowl at 3:35 PM No comments:

Email ThisBlogThis!Share to TwitterShare to FacebookShare to Pinterest
Labels: impressions

I've applied my rather sparse design skills to this blog. Removed a buncha stuff on the right, tried to make it as clean as possible.

And like a grown child-actor of a once wildy popular family sitcom, I crave attention and feedback. However, I also know that commenting on blogs can be weird, especially if you don't have a lot to say; and posting just to write 'good post', or 'this sucks more than a suckington vacuum on suck day' does seem to be more bother than it's worth.

There has also been times where my friends or e-friends or whoever have said in passing that 'such and such' post was great. This is... good, except that if I had never crossed that off hand comment by chance, I'd have never have known. The majority of my stuff gets zero comments. Ixnay. Niet. Nein. Zero. The heterosexual rating for a Liberace show. The number of humvees at a Greenpeace protest. The number of people who avidly watch both "Mad Men" and "Deal or No Deal". The rural authenticity of "Blue Collar TV". The street cred for comedians who host any show that begins with "America's Funniest...". The chance that any good, innovative, groundbreaking TV show will last on Fox. The number of post-grads who'll NOT correct you when you refer to soccer as soccer. The number of real lesbians in the porn industry. The number of art house directors who cite Jerry Bruckheimer as an influence.

On top of all this, the posts that people will say they like are, invariably, ones that I just churned out,slowly, painfully, and whose quality is somewhere between middling and mediocre, to me. Which makes my whole 'Best of periodically' kinda suspect. Sure, I like it, but that's not who counts, right?

So, few comments + need for feedback + no real idea of what's good == Outbrain! A ratings doo-hickey widget. See the stars at the end of each post? Just click and rate. It'll help me find which posts are weak, which are good, what to keep doing, what to cease at all costs.

Aaaand, if you read regularly, and have not added yourself to the Google Connect /Friends thing, please do.
Posted by Niteowl at 12:07 AM 2 comments: 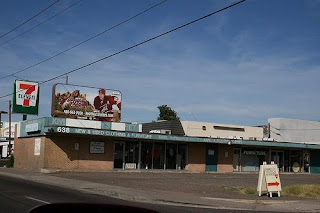 Thanks to Daniel Greene for the photo

Strip malls have always held a certain sad mystery for me. The center of small town activity, beaten up and painfully hopeful.

They bring to mind sun-cooked parking lots, over-designed laundromats, and fake-Chinese restaurants that feature, of all things, smorgasbord. The small-time fast food franchises trying to take hold. The Salvation Army, the runty clothing stores that seem to only carry 'depressingly working class attire sure to draw ridicule in the big city' clothes. The perpetual 70's decor and aesthetic.

It's full of a weird hope because it has so many small business owners scrabbling for success.

2) The undented, shining and perfect ambitition of individuals.

They're both the same thing, in a way, but one goes about it in a decidedly sterile, Overpowering Empire sort of way, the other is the elbow grease and sweat and tears and hiring your own teenagers to mind the shop path. The Empire and the Rebel make odd bedfellows.

Isn't it part of any kid who grew up in the suburbs? That's sort of your first hang out, I suppose. Chewing on hyper-sweet corn-starch infused ADHD revving candies and chugging a small tub of pop. Trying to figure out what you wanna do ('what do you wanna do?', 'I dunno, what do you wanna do' etc). The hazy crawl of everyday commerce sluggishly pouring around you. It's there that you usually fall upon the realization that your hometown is 'a hole' or 'a ditch' or whatever colourful euphemism comes to mind when one equates safe neighbourhoods, low crime rate. and middling public school standardized test scores to the heaving quicksand of staid small-town boringness.

It's the place of so many first jobs, when that kid in your realizes how much work sucks, and how much suckiness awaits you in adulthood. Deep-fat fryers, the drone of gossip, the unbearable idealism of high school car wash fundraisers.

It's a weird juncture, a strange porthole from one world into the next. Sad. Mysterious.
Posted by Niteowl at 8:08 PM No comments:

Email ThisBlogThis!Share to TwitterShare to FacebookShare to Pinterest
Labels: thought of the day

So my good friend spruce (aka Jeff) forayed into that limitless mire of hipster fashion, that bog of sarcasticaly appreciated t-shirt design, threadless. He's an artist, as you can see (and by the by, entered some 24 hour comic something or other, and made this very cool, very quirky, very spruce comic ). He's got a great style. I always get the impression that many of his characters are Dali-inspired Gumby-dolls infused with malevolent intent. There's a pliability there, and a quirky fun that you only get when you arm a serial killer with a very strong rubber band, I imagine.

Anyhow, he created this from scratch. From nothing. That whole creative process thing is terrifying and weird and I think is put under too many words and thinking; and, like zen or your first wedgie, can only be really be known by experiencing it. Nevertheless, I'll attempt to blather on a bit.

When I asked him about his design he was vague. Like, he drew it and whatnot, then thought of a back-story. Like whatever was driving the creation of it and whatever he later lacquered on as a 'story' were completely separate.

You read critics and people who 'care' about art or music and whathaveyou, and they tend to analyze art and meaning until it's desiccated husk would be too dry for The Economist. But, it seems that more often than not, there's just a 'oh shit lets just go ahead and do it and worry about the details later' approach. In a world of checklists and how-to books and endless self-analysis and re-analysis, there seems to be some truth in this method.

There's this old samurai saying that I'm sure I got off some anime or samurai comic or anime samurai comic, and I can't find the quote, but the gist of it is 'given the option between an elaborate feint, the awesome dude will just charge straight ahead'. Paraphrased there, a bit. I think the original is a little more formal and mentions cherry blossoms. But the heart of it is to DO, I guess. Less dithering.

And, as you can see by this t-shirt design, this creates more awesome.

If you think it's as super rad as I, then please go to Threadless and vote.
Posted by Niteowl at 8:01 PM 1 comment:

Thanks to
UTKChristie
for the photo.
It's strange. You hit adulthood. You live in a neighbourhood and get married and have children and whathaveyou. But you never, or at least, it'd been my experience, have those friendships you did in school. That clamouring crowd of like-minded individuals, all bursting with excitement and energy and the undaunted optimism. A buzzing outlook tempered by anxiety and parental expectations and the blazing possibility that you just might have a charmed life. And, just as likely, that your life will crash in a multitude of failed tests/interviews/jobs and you'll end up one of those pitiful characters featured in Coen Brother's films.

One moment, you don't have time for all the people you know or are interested in knowing. And in the blink of a year or ten, you're in a perpetual hamster wheel of commute/work/family/Weekend Activity Planned By Extended Family.

There's that somewhat seminal book Bowling Alone, that looks at the fall of civic engagement and group whatever. The takeaway is that no one is joining bowling leagues, no one is squeezing themselves into their monkey suits to go to Elk Fundraiser or hob-nob at a Rotary function. There is almost no way to add more friends to whoever you glommed onto at school, and whoever you may work with.

I mean, where is my Barney Rubble? Where is my Jeremy Piven? Jeremy Piven, as you probably don't know, played what I consider to be the epitome of 'best friend' in two movies that I should feel embarassed for liking but don't: "Family Man" and "Serendipity". He was funny and odd and warm and shared in-jokes with the leading men that showed a closeness you only get through years of knowing each other.

It's likely a losing strategy to compare my social life with those constructed by cocaine and adderall addicted screen writers trying to get six figures for their latest script about the heart-warming strength of the family and about how love really can conquer all, even if you have John Cusack as your lead. But there's something in me that recognizes Piven in those films.

It's like Plato's shadow on the cave wall. It's maybe this imaginary reflection of an ideal that's only pulled out to sell more beer and week-long Alaskan fishing trips. Or maybe it's a representation of what we think we should have. That bond between men. Metaphorically speaking.

As all my semi-deep rants seem to end up in a hap-dash evolutionary discussion, let's go there. Back during our most formative years, tens of thousands of years ago, hunting and gathering as hunter-gathers are wont to do, there had to be friends right? Hunting together, making sure Baak didn't get gutted by a sabertooth or that Tarkuk got his fair share of the mastodon. It was a bond formed on real stuff.

What I'm saying is that call for close friends is not coming from nowhere. Social monkeys that we are. But there is no hunt anymore, there is no grind to strengthen that stuff between men.

I'm not sure where I'm going with this. Possibly to a Al Pacino monologue, I think.

I saw "I Love You, Man", recently. And damnit all if I wasn't the main character. Socially separated and without any number of dudes who he could call friends. His painful attempts at trying to cultivate guy friends hit a little too close to home. Having 'man-dates', keeeeeripes if that didn't make my skin crawl through my ear and die on the shelf of my brain pan. But his continued awkwardness on what was cool, what was 'right', what was 'guy-appropriate'.

I dunno what happened, jobs happened, maybe, schooling happened. Life and kids and the stuff of being an adult happened. That vast sea of free time that we seemed to have to go to McDonald's or awkwardly stand in line at club vanished.