(Draft written 2014)
I have long hair. Typical nerd with a ponytail look. There really is no justifying it, other than I quite like it. Mrs. Owl loathes it, my children are indifferent but THEIR friends find it somewhat disconcerting. I've gotten quite used to the vacant stares that slowly fill with horror as little children see me. A daddy? With MOMMY HAIR!?

Sure I'm injecting just a little weirdness into their lives.

It's also my perquisite as a nerd who works at nerdly things for work.

It's our wan squeal of rebellion against the Man, never mind that we work for him and have to fill out TPS reports and attend meetings and file whatever document report thing business type people need. Never mind I have a mortgage like many people and go to work for the majority of my life like even more people and look forward, ashamedly, to whatever smidge of novelty is planned in the office come Friday. I get to wear my hair long though! Yeah! *throws Jude Nelson's half-gloved fist into the sky*

There are, as many reasons for growing the hair as their are nerdly obsessions. Well, maybe not that many. For me, it was probably first Conan, and then, the hippy soft-rock I was raised on, and now, much later, perhaps a bit of Jack Aubrey.

It's a little known fact, well, known only to parents, that parenthood consists of facing and planning for obscene horrors. Yes, there is all the schmaltzy stuff that gets posted on your Facebook wall or gets chain-mailed from your mother or aunt or whatever (eventually all coming from a devout but curiously bigoted church lady in Nebraska) , but there is that other thing.

Especially true for dads, I'm guessing. Evolutionarily it's dad's job to keep everyone from being consumed completely by a random sabre toothed tigers (I want to say T-Rexes of Velociraptors but for some reason feel compelled to adhere to scientific accuracy when spouting out a hyperbole (and weaker, but still strong, is the revulsion of using sabre toothed tigers, which I'm sure I've used before)). Not that this can't be mom's job, but she was likely much busier rearing the children and feeding them and whatnot.

One of these horrors is swimming, in a  pool. My kids have juust got past the stage of requiring life-jackets. But before that there was a very strict protocol for getting that jacket on before they even open the gate to the complex's outdoor pool. Visions of Owl Jr. slipping headfirst into the deep-end and drowning before I can say "Did you remember to put on the jacket tight?" are not uncommon.

I almost never have to go to the pool with them, usually because there's cooking that needs to get done and Mrs. Owl doesn't break out in hives when confronted by the one-two punch of sunny weather and small talk that will extinguish my will to live quicker than some time in a SE Asian tiger cage.

The kids though, love it. Even when there isn't anything to play with or any other kids there. They just kinda noodle around. I've perhaps lost that joie de vivre that helps me appreciate fully submerging myself in chlorinated water while my parents look on. How was that ever fun? Of course, I don't take a huge joy in playing with action figures or taking the latest Mattel Product Placement Animated show seriously either. A net loss, I'd say.

It's a complex swimming pool. So you get a wide range. Young families, surly teenagers, far-too-tanned retirees, young people of a certain age that you are sure they should be living downtown or somewhere else where 11pm isn't thought of as rather late.   And there is always a weird policing where you have to balance rowdiness and age and general endangerment to everyone involved. Because, horrors, drowning, desperate CPR on the side of the pool, etc.

There are cannon-ballers and little babies swimming with their consciously non-chalant parents. Your primary school kids who splash even when they don't mean to splash and find it an act of superhuman willpower NOT to run and their parents who are just too damn tired to keep reminding them.

There are sometimes even parents in the pool, with no babies to bring in with them, those not self-conscious and who have that sort of devil-may-care attitude about how they look nearly naked (exact opposite of me). That's something I've always envied, the complete disregard (usually men of a certain age) have about their well, let's face it, office job and hyper-abundance of calories and general sedentary lifestyle cobbled body that are, well, rounded.

Maybe it's something about  being a former hefty kid, now merely love-handle gifted, that finds the prospect of taking off my shirt outside of a bathroom to be insurmountably terrifying. Maybe all the guys who don't mind brandishing their trophy to 20 years of cubicle living were jocks in their youth. Forged an iron self-esteem that will not bend to the realities of donuts and gravity.

The kids have become nut-brown from all their time in the pool. They've expressed their dislike for me being a different shade. Enough for me to look decidedly unrelated. I might be forced to face the true  horror of extended sunshine exposure, if only to maintain their unfettered joie de vivre.

Why does this dog like walking around with limes so much? 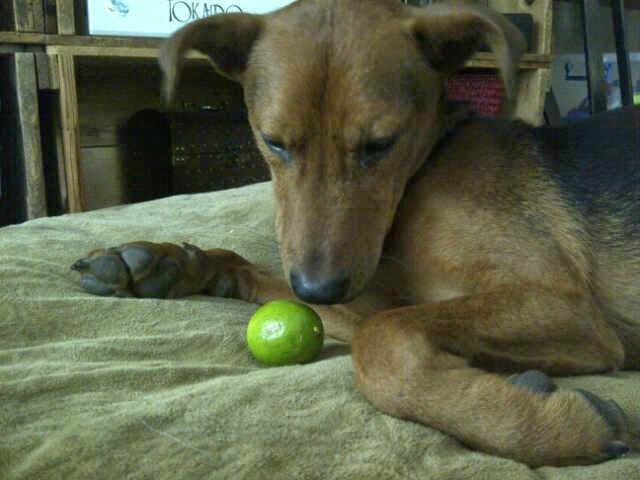 Owl Jr. is of a decided picky bent when it comes to eating. Plain carbs, yes. Chicken strips and fries, yes. Gravy on chicken? NO. He's the sort of boy who eats apples all day long and polishes it off with a long tall drink of juice. And like any First World parent I worry about him eating enough. Tale as old as the post-industrialization-enabled abundance of food driving sprawling urbanization and  a dangerous reliance on genetically invariant foodstocks.
It's funny because I was never a picky eater. I was more like Owlet. Undiscriminating, enthusiastic, and like Owlet, maybe just a touch... dense for my age (not that she knows). Owl Jr. is just a ball of yelling screaming, jittery energy. He doesn't go anywhere, he bounces, he jostles, he judders.
So, so, so, I gotta, like a grandmother from country that is resolutely trying to get into the EU, fatten him up. He does like pancakes, of all things. I stuff it with blueberries and chocolate chips and I cram him with them during the weekend. Discs of carb and sugar and more carb. Owlet, for whatever reason, actually doesn't really like pancakes, so she gets eggs and sausage.
It's usually only Sunday that I do the breakfast. But every breakfast, my kids, looking up from Netflix, ask me what I'm making for breakfast. Adult life stretches out in routine, time crunches together and before you know it you are grumbling about your pension and taking a baffling interest in fly-fishing. What I'm saying is I'm not entirely sure how long I've been doing this breakfast, but we've gone through at least two of those Costco "Oh Look Now You Have To Feed The Street Dance Party After the Lowerr Middle Class Youth Sports Team Beats The Rich Kids Across The Lake"-sized pancake satchels. Awhile, in any case. What are they expecting me to say? Beef tartar with honey lemon confit?
People, generally hate change, kids doubly so. I can only asume they want assurances that their breakfast as per usual will not be altered. Or maybe they simply forget after five or six days. The flurry of pans and smoke and dicing and whatnot is, I've found, no concern of theirs. Results. And to be honest there have been a few dinners I've tried, hounded by some mysterious guilt to get my kids to try new things, that have been far too adventurous, ending with Mrs. Owl and I really enjoying it, our kids having a bite, then having some innocuous leftovers instead.
I guess its less of a question as an interrogation, a line drawn in the sand that they remember, and will no longer tolerate a repeat of the Sundried Tomato Incident. Plain carbs. Plain meat. Plain veg. Please and thank you.
Posted by Niteowl at 10:25 PM No comments: